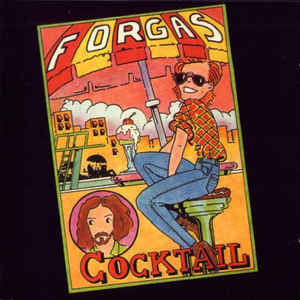 Recensione: Patrick Forgas' debut album, "Cocktail" (originally released in 1977, but reissued by Musea in 2008 with 13 bonus tracks), would not be misplaced among the output of other non-English Canterbury bands, such as Supersister or Picchio Dal Pozzo.
As the colourful, cartoon-like cover artwork immediately suggests, this is not the kind of music that takes itself too seriously, in spite of the high technical quotient of the performances.
Forgas' Wyatt-like vocals (admittedly a bit of an acquired taste), with their quintessentially French air of sophisticated nonchalance, add to this relaxed, feel-good atmosphere.

The first ten tracks - most of them no longer than a couple of minutes - are those featured on the original version of the album.
The 18-minute suite My Trip, strategically placed in the tenth slot, comes in a way as a surprise.
The album's undisputed highlight, it is one of those compositions that are almost impossible to describe effectively, on account of its extremely diverse structure.
While all the instruments contribute to the build-up of this tour de force, the real star of "My Trip" is Gérard Prévost's bass.
A former member of Magma offshoot Zao, Prévost really makes the difference here, his stunning performance holding an otherwise rather fragmented track together.
Opening in classic jazz-rock fashion, with echoes of Bruford here and there, it then turns more experimental, with Forgas' scat-like vocalising, and lyrical violin strains to soften the atmosphere.

The bass is also at the forefront in the brisk, uptempo "Orgueil", coupled with clear, tinkling guitar; while "Monks", which also features Canterbury's trademark fuzzed-organ sound at the beginning, is built upon a steadily weaving main theme, enriched by violin and flute.
Forgas' elegantly measured drumming is a core feature of all the songs, enhancing even very short offerings such as "Reflet D'Ail" or "Vol D'Hirondelles".
His peculiar singing style (a falsetto that sometimes reminded me of The Northettes, even more so than Robert Wyatt) fits the nature of the compositions, in which classic Canterbury stylings meet with funky touches (as in the almost danceable rhythm and vocals of "Rhume Des Foins"), besides the more obvious jazz influences.
The latter are very prominent in the title-track, whose smooth, almost lazy flow reflects the carefree attitude implied by the album cover artwork.

The thirteen bonus tracks include alternate versions of some of the original songs, as well as previously unreleased material.
The latter ranges from the oddly infectious tune of "Magie Major" to the darker, electronics-infused atmosphere of "Arrête-Toi" and "Espoir".
Somewhat frustratingly, none of those tracks (with the sole exception of the demo version of "My Trip"), is longer than four minutes.
While all adequate, they are not what I would call indispensable: the bass-driven "Nos Cheveux Emmelés", with its relaxed, jazzy pace and Canterbury-style organ in the background, is the only song that actually stands out.
In spite of the album's undeniable strengths, it should also be stressed that 73 minutes are a bit excessive for the average listener's attention span, in particular for those who prefer to listen to albums in one sitting.
On the other hand, Musea Records deserve praise for having rescued it from oblivion, even if not all the bonus tracks are up to scratch.
Highly recommended to Canterbury and classic jazz-rock/fusion fans, as well as to those who appreciate an outstanding rhythm section, "Cocktail" is a very enjoyable, uplifting effort, worthy of a solid 4-star rating.