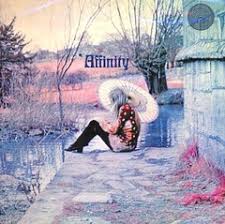 Recensione: Affinity biography
Like many bands riding on the crest of the jazz-rock wave in the early '70s, AFFINITY released one album and were just getting their footing when they decided to split up, despite the album being well received by the critics.
They were fronted by Lynda Hoyle, a powerful vocalist who sounds like a cross between Carol King and Julie Driscoll.
The other band members were Mo Foster (bass), Mike Jupp (electric and 12-string guitars), Lynton Naiff (keyboards) and Grant Serpell (drums and percussion).
Basically, their music is an eclectic mixture of a blues-rock with jazz, pop and folk influences as well as some rudiments of early '70s psychedelia.
Their sound is very brassy and the Hammond organ omnipresent, the overall product sounding very progressive for its day.

Issued in 1970, their only official (self-titled) album shows much variety as well as plenty of soloing.
As the excellent sound, musicianship and production will attest, it is a superb achievement for the times.
Their material has since been reissued on different cd's, some featuring studio demos and full-band rehearsals.
One of them is made up entirely of live instrumentals, recorded at a time when vocalist Linda Hoyle was temporarily hospitalized for a vocal chord operation, leaving the rest of the band on their own.