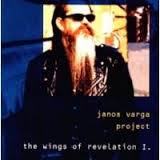 Recensione: Former guitarist and star in the popular and early-strong Hungarian prog-rock band EAST, János Varga has extended his career to solo scales, through projects, collaborations and adventurous guest entries, all which should, mostly, be familiar to fans of his music and stature, plus worthwhile to discover for any rock collector.
JÁNOS VARGA PROJECT certainly tops all his other projects and performances outside EAST, sounding fresh & modern, and casting automatically, of course, a main credit and a bright light on him.
It's impossible not to relate János Varga with his old, "neo-classic" and steady-coursed band (but it's wise, instead, not to think of great similarities in the music), especially when the big praises given to them (at least in Hungary) easily reflect and help jump to the conclusion that Varga is a high-promotable and mature guitarist.
Nevertheless, with only this thing in mind, JÁNOS VARGA PROJECT wouldn't be more than a prog-related affair.
Having worked on a big project called "Wings Of Revelation", out of which they've released 2 CD parts plus a DVD, the band has its essential element in the music, evoking Varga's composing, interpretative and producing merits before clinching to particular styles and anything else, still having anyway a natural progressive balm, even if not in an entirely homogenous and pure way.

With fewer biographical notes and stories than you'd wish to find and read, and a healthy critic circling only around sponsor labels and important rock chronics, János Varga doesn't look after all like an entirely popular worldwide musician; this, fortunately, also makes him least inclined towards commercial outputs, though bit of this project's music follows that direction in a slight way.
Most significant, anyway, is how he's mentioned as a crafted, zipping, resourceful guitarist - and how true that is.
Out of around 10 or so projects he worked or was guest on (excluding the EAST albums), JÁNOS VARGA PROJECT seems one of his best efforts.
Without nudging a very particular style, this project isn't ball-parking numbly either: it's mostly progressive, and moderately extensive! And, given this, János Varga is the key artist, topping with skills, if not with a lot of soul and modern vibe, balanced sustanentely with the work, as well.