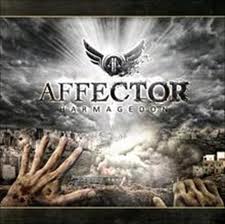 Recensione: Affector is a Progressive Rock/Metal band founded by German guitarist Daniel Fries and Dutch drummer Collin Leijenaar (Neal Morse / Dilemma).
They were soon joined by bassist Mike LePond (Symphony X) and vocalist Ted Leonard (Spock's Beard/Enchant/Thought Chamber) from the States and began working immediately on their debut album Harmagedon.
On this recording they are joined by four special guests on keyboards: Alex Argento, Neal Morse (Transatlantic/Flying Colors), Jordan Rudess (Dream Theater) and Derek Sherinian (PlanetX / Black Country Communion).
The album will be released in 2012, the year many people believe the world will come to an end.
Panic, mayhem and anarchy are to be expected by many, but what will happen? It s up to time to decide.